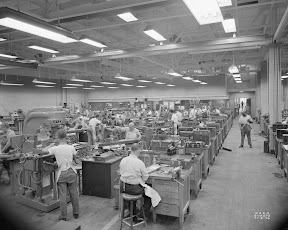 As working class Americans have seen their wages stagnate, they are faced with problems much bigger than payday loans. Image from Wikimedia Commons.

Some claim payday loans and the ensuing debt trap are a huge obstacle to the middle and low income classes. The evidence for that claim doesn’t really hold up. In fact, it distracts from the problems facing working Americans. A person will only get a cash advance if it’s needed. Furthermore, there are reasons why a loan until payday actually helps more people than ever.

Wages and costs are bigger problems than payday loans

Numerous studies on the demand for and use of payday loans point to usually one factor that explains why anyone goes to borrow money from a payday loan lender: unexpected expenses. For example, if a water heater quits or a tire picks up a nail, the cost is more than a person can cover between the time that it happens and next pay day. There are multiple reasons fewer people are able to meet these expenses. First of all, overall wages have been stagnant for a long time. However, living costs are going up, especially for health care. In fact, health care costs are the cause of 60 percent of personal bankruptcies.

A decrease in wages during a recession is to be expected. The labor market has been depressed since 2008 but has held at about 9.5 percent unemployment. That said, wages have actually been falling since 2000, according to ABC. According to a report by the White House Council of Economic Advisers, wage stagnation in that time period is partially linked to an increase in cost of health insurance. Stagnating wages, combined with inflation, is a recipe for middle class disaster. Considering how many more people are out of work and have had their homes foreclosed, the problem may be getting worse. Payday loan lending is the least of middle class problems.

The middle class is at a disadvantage of epic proportions. As early as 2005, it was found that 10 percent of the nation held 70 percent of the wealth. The lack of wealth creating opportunities is a far more dangerous problem than any small dollar loan product. You can read more in the Payday Loan Facts and Statistics Report on Personal Money Store.