Payday loan stores first began appearing in Utah around 1984. According to the Deseret Morning News, by November 2005, the state boasted more than 380 payday lenders. Business was thriving, due in part to Utah’s laws that were relatively friendly to the industry. However, in 2016, almost 17 percent of the storefronts in the state went out of business, leaving many to wonder why Utah experienced such a rapid decline in the number of payday loan stores. 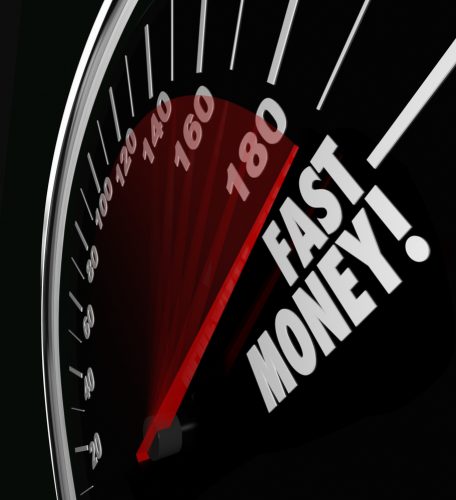 Easy payday loans make it easy to obtain cash in a pinch, but not so easy to repay these “fast loans” quickly.

In 2015, there were 553 payday loan stores in Utah; by the end of 2016, there were 462. This is the equivalent of one closure for every six stores. For comparison, Sears, despite its dire financial problems, closed fewer stores nationwide in 2016. Obviously, for Utah to have so many payday lenders close in such a short time, something consequential must have happened.

What happened was that over the years, new legislation made Utah less hospitable to payday lenders. Some changes were made at the local level, but others were made by the state legislature, including burdensome reporting laws that became effective in 2016.

West Valley City: Where the Campaign Against Payday Lenders Began

West Valley City is one of Salt Lake City’s numerous suburbs. The population of West Valley City was almost 129,500 in 2010, an increase of 18.9 percent over 2000. At first glance, it appears an unlikely candidate to spark payday loan reform, but the actions of this town’s citizens ignited a wave of local regulations restricting payday lending stores.

West Valley City was the first municipality in Utah to use local zoning laws against payday lenders, according to a report published by the University of Utah. The zoning laws were amended so that payday lenders, check cashing services, bail bondsmen, tattoo parlors, pawn shops and several other types of businesses no longer qualified as “permitted uses” in two of the town’s three overlay zones; only payday lenders and bail bondsmen were covered by the changes to the third zone.

Neighboring cities soon followed West Valley City’s lead. In 2003, West Jordan passed an ordinance that required check cashing credit services — otherwise known as payday lenders — to be at least 1,000 feet apart. The ordinance also established that there could be no more than one payday lender for every 10,000 citizens. At the time, the population was almost 100,000, equating to 10 lenders; although there were already 12 lenders, the city allowed them to stay, reasoning that population growth or failed lenders would bring the ratio into conformity.

One by one, the remaining towns in the county passed ordinances that either limited the number of payday lenders permitted, banned new lenders or restricted their locations. By 2007, virtually every city in the county had placed restrictions on payday lenders. In 2009, Salt Lake City passed an ordinance that was quite similar to the one enacted in West Valley City.

Before 1999, Utah did not attempt to regulate payday lending at all, according to the Deseret News. The regulations that were adopted that year were relatively insignificant.

• Payday lenders were required to be licensed by the state.
• They had to give borrowers written contracts that showed the annualized percentage rate.
• Payday loan stores had to post signs showing their rates as both a dollar amount and an annual rate.
• They had to post signs listing the phone numbers that customers could call to file complaints with state regulators.
• Loans could only be extended for 12 weeks, meaning the lender could not continue to collect interest but could impose collection fees.

The law made no provision to fine lenders who violated the regulations or misled borrowers although the state had the power to close lenders who had too many complaints or violations. However, between 1999 and 2005, the state closed just one.

Little by little, Utah legislators began to enact stricter laws for payday lenders. They have also continued to amend existing laws to offer greater protection to borrowers. The most significant of these laws are listed below, courtesy of the Office of the Legislative Auditor General.

• Borrowers have the right to cancel a payday loan by returning the loan amount to the lender no later than 5 p.m. on the next business day after the transaction without paying any fees. In other words, a borrower could take out a loan for $500 on Friday, return the following Monday, repay the $500 and have had the use of the lender’s money for the weekend.
• Payday lenders are only allowed to collect interest on the outstanding principal for 70 days after the date of the loan. Originally, the term was 84 days or 12 weeks.
• If the lender has charged interest or fees for 70 continuous days and the loan has not been fully repaid, the borrower may request an extended payment plan that allows the debt to be retired through installment payments spread over at least 90 days. The lender is legally required to agree to the plan at least once per year per borrower. Again, the lender cannot charge any interest or fees during the extension.
• If a borrower pays off a loan that was extended under the 70-day rule, the lender cannot make another payday loan to him or her until at least the next business day.
• Prior to giving a new customer a loan, the lender must obtain a credit report on the borrower.
• All loans must be reported to a credit reporting agency.

Furthermore, lenders are required to submit an annual report that covers a variety of information, including the number and dollar amount of rescinded loans, the number and dollar amount of loans that were not retired within 70 days, the percentage of loans for which the lender initiated civil action for collection and the average annualized percentage rate that the lender charged.

Is Utah Regulating Payday Loan Stores Out of Business?

Critics of the payday lending rules developed by the Consumer Financial Protection Bureau warned that the agency was effectively regulating the industry out of business. If the trend that has developed in Utah holds true on the national level after the new rules become effective, the critics may well be proven correct.

Currently, the payday lending industry is in a state of unrest. No one is certain what the future holds — there are simply too many unanswered questions.