Home > Finance > Can Quick Payday Loans Avert a War of the Worlds?

Can Quick Payday Loans Avert a War of the Worlds?

No, But They Can Pay to Fix Windshields 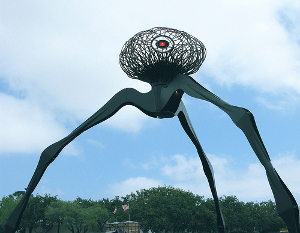 That Kruger sped by on his Vespa. It looked like he had one menacing red eye… (Photo: flickr.com)

OK, so this is a story about something called quick payday loans. My brother and I had some fun with a neighbor’s cat, and the weird dude owner threw a rock that broke our car window, and dad needed the extra cash to fix things up.

Here We Go, Into Space

It’s Halloween, and my parents are big fans of the old radio show “War of the Worlds,” so they convince my brother and I to dress up as a fugly Martian and go trick-or-treating in the neighborhood. I want to go to the school carnival, but my brother convinces me that we can have a lot of fun. Once he grabs a carton of eggs, he gets me on his wavelength.

Off to Kruger’s Universe

We’re wandering down Elm Street when we come to the house of Old Man Kruger and his spacey cat. He’s really weird. Through the plate glass window in his front yard, we frequently see him sitting there, listening to the radio and acting like a weirdo. How weird do I mean? He talks to the radio, screams and sometimes dances about like a withered, overly-caffeinated stilt-walker. He’s tall, too, so I think of stilts.

My brother Lemmy and I see his space cat wandering around in the front yard, so we decide to have a little fun. With an “oogah” and a “boogah,” we spook the kitty and manage to corner it. Neither of us are going to do anything nasty; we just love being Martians and teasing strange people and their pets.

Long story short, Kruger hurts himself as he’s trying to scare us off. We buzz him with the eggs as we ride off on our bikes, and Kruger curses us and our offal spawn.

Blast a Month Into the Future…

Lemmy and I are playing basketball in our driveway when Kruger speeds by on a Vespa and throws a rock our way. It barely misses my head, and it manages to break the windshield of my dad’s car. He gripes about how he doesn’t have the money to fix it right now, but I hear from mom that he’s thinking about going online to some company called Personal Money Store. They can loan him fast cash that he won’t have to pay back until his next payday. It isn’t very expensive, either, which is great, because I want him to buy me a new bike soon.

Until the windshield is fixed, he’s riding my bike to work. Every morning, I hear him break out his best imitation of some old guy named Orson Welles: “Kruger, our worlds are at war…”