Consumers Use Personal Loans as G-8 Nations Brace for Recovery

Will the G-8 Solve the Economic Crisis? 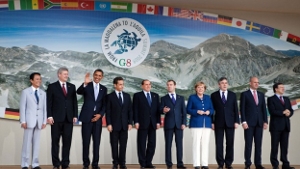 Consumers look to personal loans to help with finances during this recession. Will gains made at the G-8 conference trickle down and help their finances? (Photo: wikipedia.org)

Consumers are still looking to personal loans for financial aid as the world recovers from the recession.  Later this week, the G-8 nations are gathering to discuss the economic recovery.  Despite anticipating change, they warn that it is too soon to announce the end of the global crisis as many countries are still stabilizing from the recession. The full impact of the economic crisis has yet to be felt by some economies and the G-8 nations want to give the world time before they start generating short-term solutions.

US Treasury Secretary Timothy Geithner stated, “These early signs of improvement are encouraging, but the global economy is still operating well below potential and we still face acute challenges… Economic and financial recovery will be stronger and more sustainable if we make clear today how we get back to fiscal sustainability when the storm has passed.”  Additional numbers are suggesting that there will be many economic challenges to overcome before the world returns to any state of normalcy.  The World Bank is projecting the global economy to shrink by three percent this year, which is much worse than their previous projections of only 1.75 percent.

In addition, a two-day summit that included the US, Japan, Germany, France, Britain, Italy, Canada, Russia and the European Union concluded that the “situation remains uncertain and significant risks remain to economic and financial stability.” They also confirmed their decision to provide additional stimulus as needed upon reassessment of the global economy.

The summit leaders asked the International Monetary Fund to help the assessment process, giving viable exit strategies from world-wide stimulus plans. They believe that tax cuts and decreased interest rates are keys to encouraging “sustainable recovery over the long term.” Though this sounds like a good solution, some countries aren’t as supportive. In particular, Germany has been an opponent of continued usage of tax cuts and lowered interest rates, warning that it could cause higher inflation and increase the deficits even more.

Despite opposition, there are some accepted precepts of the G-8 meetings.  They confirm that to get the global economy back on track new rules must be created. These rules need to focus on transparency in the global marketplace and finance. This transparency is crucial to producing trust throughout the world population.

What This Means for Americans

In the short-term, this means that more tax cuts may be on the way for Americans. In addition, lower interest rates will be available.  This is all good news to a nation that has relied heavily on personal loans, credit cards and business loans to finance lifestyles as the recession hit hard.  One supporter of the G-8 summits is Dallas, Texas resident Crone Adkisson. Adkisson stated, “I’m delighted that the entire world is gathering to find some answers to our problems. I know the recession isn’t completely over, but I want to be prepared financially to handle things when it is.”

The U.S. is asking foreign banking regulators to create methods of quickly resolving failures of cross-border financial firms. They also want to address poverty in third-world countries and how to best handle climate changes. With a full agenda, the G-8 leaders agree that the meetings probably “won’t find agreements, but we will need to have political compromises.”

Polls are showing that U.S. citizens are encouraged by the meetings, hoping that the full brunt of the recession will soon be revealed.   Many families have relied on personal loans, family aid and government grants to help them through the economy for far too long.  They want to be met with an economy that is reinvigorated and is providing adequate jobs, moderate interest rates and affordable mortgages once again.