A Bubble Waiting to Burst 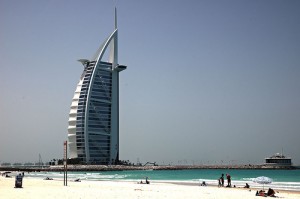 Dubai sports some of the most striking Real Estate in the world, but that sector and banks are facing serious trouble. (Photo: flickr.com)

Dubai World, the state-run owners of Nakheel (the Real Estate arm of the Dubai Government) is reported to be defaulting on a $59 billion loan. This loan was used to finance numerous projects involved in construction in and around the city of Dubai. Did the financial wizards of the country fail to visualize the oncoming crises? The writing was on the wall ever since the global crises began. Is it just Dubai World that will be facing the music? From information coming out of the country, it looks like banks that have advanced personal loans to individuals working in the country will face immense losses as well.

Dubai is one of the seven emirates in a country known as the United Arab Emirates, with Abu Dhabi being the capital. Each of the emirates has been ruled by a particular family for generations. For example, the presidency of the country is hereditary to the emirate of Abu Dhabi. Similarly, the prime minister is always chosen from Dubai. The other emirates are also represented in the supreme council. The population of the country stands at approximately two million. Nearly 50 percent of the population consists of expatriates who are in the country working on the numerous projects being carried out. Oil and gas are the major contributors to the economy. However, Dubai has diverted from its traditional and known sources of income to become a popular tourist destination. It has invested heavily in infrastructure that attracts tourists and is also a tax haven.

All projects carried out by Dubai World and Nakheel is located in the city of Dubai. It is therefore natural to have a better part of the workforce in the same city as well. Most of this workforce comes from the lower segments of the projects, with no access to bank accounts or any credit facilities. Only about 25 percent of the workforce has access to such facilities. These are the people who will have taken personal loans and be using credit cards. In the event of downsizing during the current global recession, the company employing such people has only to transfer their end of service benefits to their accounts. For people who have taken personal loans from the banks, the money is automatically adjusted against the loans. The laid off personnel have 30 days to leave the country, which in all cases is stringently imposed.

But here’s a big problem: If the loans are not paid in full, the employee just gets out of the country, leaving the bank to bear the cost of the balance.

A Big Problem for Banks

Having advanced the personal loans to the expatriates based on their length of service and a letter from the employer – and stipulating that all wages will be transferred to their accounts – the banks are in no position to initiate recoveries of any kind from the borrower. The borrowers are free to catch the first available flight out of the country and out of the reach of the banks. Local banks in such cases will be hit by a growing number of bad debts on their balance sheets. This problem is far bigger than the $59 billion that is being spoken about, and there is no solution currently in sight.