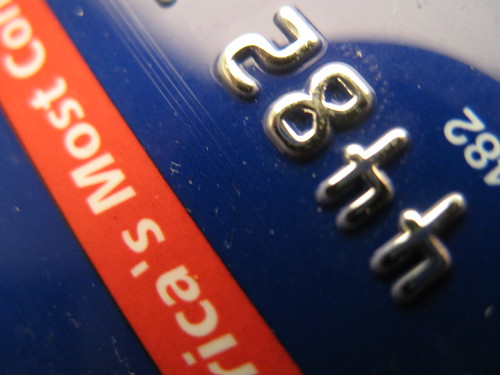 Knowledge about personal finance among Americans is increasing, but high credit card debt shows some hard lessons learned during the recession are being ignored. Flickr photo.

Americans are more educated about credit than they were before the recession, however, their knowledge about personal finance isn’t resulting in better decisions about credit and lending. A survey indicates that most Americans know the interest rates they are paying on their credit card and they know their credit rating. Even so, they continue to carry high interest credit card debt and many don’t know how to improve their credit scores.

A survey of personal financial knowledge by Harris Interactive on behalf of Lending Club shows that Americans still aren’t making the most of hard-learned fast cash credit lessons learned during the recession. Adults unaware of their credit score came in at 31 percent, compared to 45 percent who didn’t have a clue in 2007 according to a Bankrate, Inc. survey. Fewer adults (22 percent) who use a credit card don’t know the interest rate on the credit card they use most often (compared to 29 percent who reported not knowing in 2007, according to a National Foundation for Credit Counseling survey).

Credit card companies will be glad to know that of those adults who do know the interest rates on their cards, the survey shows 31 percent have an interest rate of 20 percent or more and 64 percent pay 14 percent or more. Although 93 percent of credit card users know it’s possible to negotiate for a better rate, only 29 percent have ever tried to. Although closing a credit card account negatively impacts credit score, 18 percent erroneously believe it increases your credit score; 27 percent believed it has no impact. For those with debt other than a home mortgage, credit card debt is the most common type of debt overall (67 percent) and often the most expensive type of debt to carry.

To gain more knowledge about personal finance, AOL Money Coach Jennifer Openshaw has advice for consumers who want to be smarter when it comes to credit. If you aren’t aware of your card rates, find out. And once you do, take the initiative to ask for a lower rate. About 68 percent of those who ask for a lower rate are successful and build confidence in their financial savvy as well. Start with a target rate in mind, be assertive and ask for the supervisor if necessary.

Know what affects your credit score

Openshaw also suggests learning about what affects your credit score. Know that closing older accounts reduces your balance-to-credit card limit ratio, which may actually lower your score. If you have trouble controlling your credit card spending, it may be better to take the temporary hit to your score so you have fewer sources of temptation. Finally, cut your costs on current debt, consider paying off all your debts with one lower interest rate bank loan, but don’t do it on a credit card.