Profits are in Line With Traditional Lenders, Says Study 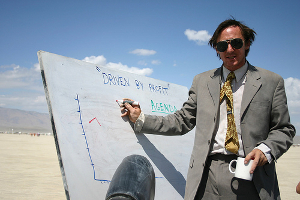 Think this represents the average payday loan company CEO? Think again. Profitability is hardly out of sight, even if it has allowed the industry to grow. (Photo: flickr.com)

Infinite profits earned off the backs of the infinite suffering masses. If you take your news from the multi-colored, sugar-laden toothpaste tube that is the mainstream media, then you believe that the payday loan industry is reaping massive profits while those who crawl about on their bellies are drowning in six inches of debt. It’s such an affecting image that it resides in some nether-region beyond belief. In other words, don’t buy the hype about places that offer a check advance near you.

Payday loan companies aren’t a charitable organization, to be sure. They profit from the service they offer to consumers, but as studies like “The Profitability of Payday Loans” by Paige Skiba of Vanderbilt University Law School and Jeremy Tobacman of Oxford University indicate, the profits derived from interest are very much in line with those taken by more “traditional” lending institutions.

Short-Term Liquidity Has its Price

That’s exactly what payday loans and similar forms of short term loans provide. Their convenient immediacy (sans an extensive battery of credit and background checks) presents a certain amount of risk for lenders, so price protection is understandable. Skiba and Tobacman use financial data from the Center for Research in Security Prices (CRSP) and SEC filings, as well as check data from several major payday loan companies.

While the most expensive payday lenders charge what amounts to over 1,000 percent APR (somewhat moot; payday lenders typically charge 12 to 20 percent for two- to four-week loans), the authors find that “lenders’ firm-level returns differ little from typical financial returns.” The implication here is that on a per-loan and per-store basis, the payday loan industry experiences high costs that bite into their “profits.”

Methodology of the Study

The authors examine the CRSP and SEC numbers for seven First we summarize publicly available, firm-level profitability data from CRSP and SEC filings. They find average returns of 10 to 25 percent each year in profit. That’s on a per-firm level.

On the individual level, it is observed that loans are generally small, yielding a meager $49 in interest on average. Yet five percent loss ratios eat up more than one quarter of that interest. Net returns (interest minus defaults) amount “in expectation over all of the marginal borrower’s loans to only about $100,” find the authors. Payday lenders, then, would appear to exist in a highly competitive environment where per-loan and per-store costs are indeed large when compared with interest earnings.

According to the data, payday lenders have performed well on average, earning 10.1 percent profit. Yet because returns have been volatile, the Sharpe ratio (of excess return) is close to zero. Stock data has revealed little indication of excess dividends and SEC 10-K and 10-Q show only “moderate” return on equity, find the authors. Looking at the data of the payday loan firms involved in the study and comparing their returns against those of companies in the S&P 500, the authors once again find that there is “a profile of firm-level profits that fails to approach annualized payday loan interest rates.”

It should be noted that government regulation of the payday loan industry, particularly the September 2006 Talent-Nelson Amendment cap on lending to active-duty military, have impacted firm-level large risk premiums, to the point where the FDIC even released a report (http://www.fdic.gov/regulations/safety/payday/) suggesting that the “unusual risk” accepted by payday lenders justifies the interest and suggests ways payday loan companies can effectively handle this risk.

How does interest as high as 7,295 percent (the highest instance in the authors’ study) per year lead to only a 10 percent equity return? The authors look at individual-level data for payday loan origination, repayment and instances of customer defaults. The authors determine a mean payday loan size of $283 and median of $269. Eighteen percent interest leads to average revenue of $49 per payday loan, but once losses are taken into account, the story changes. The authors observed that approximately nine percent of post-dated collateral checks bounce. Collections were found to be pursued internally for 60 days, during which time the lenders collected on about half.

Credit standards tell an important tale as well. The better the short term loa consumer’s credit score, the greater revenues payday lenders derive. The authors find that “the intercept of the best-fitting line at the credit score threshold is $100.49. Thus, if the industry is competitive, the total economic costs of servicing the marginal borrower equal $100.49.”

Returns are astronomical in theory only. Stock returns are also observed to be modest for payday lenders. Store-level costs have to play a major role in this. A 2003 study by Jerry Robinson and John Wheeler estimated 40,000 employees in the payday lending industry. Their wages totaled $1.4 billion annually. They also found that total interest revenue for payday loans totaled $4.0 to $4.3 billion in 2002, indicating that employee salaries eat up a significant portion of that (about one-third).

A 2003 study by Michael Stegman and Robert Faris found that while the 2000 per-payday loan outlet profit in North Carolina was $57,999, the capital requirements for these outlets amount to at least $35,606. This doesn’t factor in wage costs, rent, marketing or administrative expenses, but it does include bounced-check fees, screening costs and loan losses.

You begin to see how expensive it is to operate a payday loan business. Flannery and Samolyk (2005) found that store costs and their revenues are related to store age, too. Start-up costs and establishing a clientele are difficult hurdles that have led newer entrants into the payday lending market to consider the online payday loan market.

Skiba and Tobacman present this hypothetical. Let’s say a payday loan store has $10,000 in capital at the beginning of the year. If risk is loan default risk is eliminated from the equation and 18 percent interest is earned every two weeks, the take would be $739,500 by year’s end. If annual wages amount to $30,000 (paid out every two weeks), that bill would be a large part of the $1,800 in interest income at the beginning of the year. At that time, the store would only early six percent on its capital. The year-end result would be an annual net of 2,150 percent, which is profitable but hardly extortionary.

So Someone Thinks Payday Lenders Should Only Charge by Cost?

Critics want a flat fee for payday loans – regardless of loan size – but the truth is that so many cost variables exist such as the cost of firms to originate payday loans that per-store differences in fees charged are necessary. Considering the explosive growth within the industry (200 stores observed in 1990 according to the authors vs. 30,000 in 2004), which came in no small part due to lobbying, there is both a consumer need for the product and an environment in which they can successfully exist on the subprime market.

Pricing behavior is largely regulated by oversight organizations like the Community Financial Services Association and the Online Lenders’ Association, but businesses that exist outside these member organizations may unfortunately set rates that are far beyond what is necessary. This is where government regulation can help rein in payday loan companies with the most excessive prices (even if this group may be in the minority of the industry), but excessive regulation is not desirable. Stifling market competition and limiting consumer choice are hardly a desirable alternative.