Home > Finance > Payday Loans: Going Where the Need is Greatest

Payday Loans: Going Where the Need is Greatest 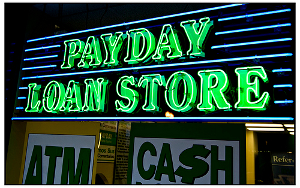 Payday Loans have the green light when it comes to going where the financial need is greatest. Access to conventional credit plays a large role. (Photo: flickr.com)

Payday loans are an inescapable landmark in America’s modern economic landscape. The popularity of the short term loan product has grown significantly since the early 1990s, and it’s no wonder. Giving consumers the ability to absorb financial shocks in the short term – enabling them to avoid hefty penalties – is useful for maintaining economic welfare. It is important for consumers to be educated as to their alternatives in a financial emergency, however. For their part, the payday lending industry (organized under such groups as the Community Financial Services Association and the Online Lenders Alliance) has helped to educate consumers as to how advance payday loans work and when they should or shouldn’t advisably be used. However, the responsibility rightly rests with the individual.

Unfortunately, the image still persists within the popular media that payday loans are an instrument through which unscrupulous businessmen and women exploit “at-risk” members of society. One of the primary means these critics use to attempt to prove their point is by focusing on the geographic clustering of brick-and-mortar payday loan locations (as well as pawn shops and check cashing outlets). This fails to take into account online payday loan companies and aggregators like Personal Money Store, whose average customer by income tends to fall comfortably into the middle class. However, when brick-and-mortar locations only are considered, a clear pattern of going where demand is greatest becomes apparent. A recent study by Robin Prager, the Assistant Director in the Division of Research and Statistics for the Board of Governors of the Federal Reserve System, supports the assertion that payday loan businesses tend to cluster in areas where access to credit may be restricted and liquid assets that help consumers handle financial surprises may be closer to scarce than abundant.

“Determinants of the Locations of Payday Lenders, Pawnshops and Check-Cashing Outlets”

Prager groups payday loans, pawn shops, check cashing and a number of related short term loan companies under the name “alternative financial service providers” (AFSPs). Recognizing the controversy the rapid growth of these institutions has generated, Prager analyzes the geographic placement of AFSPs. Using county-level data for the entire country, she expands upon the regional work most studies had undertaken before. Demographics, population, consumer credit profiles and the degree of strictness in state and local laws all play a role in where the largest clusters of AFSPs appear.

Payday lending, pawn broking and check cashing aren’t overnight sensations. They date back to at least the 1930s, although payday lending may date back to Colonial America and pawn broking in its various forms is particularly ancient. As with any explosive growth industry, there has been a need for regulation. AFSPs are subject to regulations on the federal, state and local level. Such things as the Gramm-Leach-Bliley Act, the USA PATRIOT Act, and the Bank Secrecy Act all have jurisdiction. Moreover, all loan companies must follow the federal rules of the Truth in Lending Act, the Equal Credit Opportunity Act, the Fair Credit Reporting Act, the Fair Debt Collection Practices Act, and the Talent-Nelson Amendment to the 2007 Defense Authorization Bill, to name a few. On the state and local level, numerous and variable other regulations exist. It’s safe to say that a regulatory maze exists when it comes to AFSPs. While they do serve to protect consumers against potential exploitation, the question as to whether over-regulation has stifled competition with the consumer financial services industry is a more than legitimate area for study.

Prager found that in 2006, 98.9 percent of rural and 99.6 percent of urban counties in the U.S. featured at least one bank or thrift branch. Furthermore, two-thirds of rural and 90 percent of urban counties had at least one AFSP provider (payday lender, pawnshop, check casher, etc). Considering population by county, the average of 33,000 people were serviced by 2.5 payday loan stores, 1.2 pawn shops, 1.7 check-cashing outlets and 10.7 bank and thrift branches. On the urban side, the numbers change to 220,000 people, 16.6 payday loan stores, 7.4 pawnshops, 21.2 check cashers and 67.5 bank and thrift branches. AFSPs like payday loan companies are certainly not more prevalent than banks in Prager’s sample.

Where Do the Payday Lenders Congregate?

Banks and thrifts found their highest concentration in the north central states, including Kansas, Nebraska and North Dakota. This did not tend to correlate into having a negative effect on the number of pawn shops and check cashing outlets in a county, but Prager did find a positive correlation when it came to payday loan stores.

Here is where we get to the heart of the matter with AFSPs like payday loan stores. They tend to appear where the need is greatest. If consumers have difficulty security mainstream credit in an emergency, then payday loans become a very attractive option. Prager introduces an equation that factors credit availability and a variety of other factors in order to express the number of AFSP outlets as a function. It is a function of the following demographic data: racial/ethnic mixture, age, consumer education, poverty standing and the county’s population density. As stated, creditworthiness and area regulations are also factors.

Here are some of Prager’s comments on results:

Prager recognizes a few general patterns: 1) Payday lenders/AFSPs appear in credit challenged areas; 2) But they tend to avoid areas where the poverty level is highest; 3) AFSPs and other payday loan businesses aren’t seen to be particularly concentrated in Hispanic regions; 4) Payday lenders do tend to appear more in the African-American community; 5) population density and payday lending presence are connected in rural areas, but not as much in urban; and 6) Not surprisingly, areas with tighter regulation show a much lower instance of payday loan companies.

Payday Lenders Do Not Prey on the Poor

This is what Prager found based upon county-to-county data and it runs contrary not only to what the mainstream media would have you believe, but to the findings of a number of past studies. Credit scores remain a prime factor in distribution of AFSP. Going where the need is greatest is an idea that holds up in this instance. Mainstream credit may be less expensive on average, but if a consumer does not have the credit to access such a thing, then payday loans are the best options. As federal, state and local governments devise new ways of continuing to limit the industry, what exactly do they think credit-challenged individuals are going to do? If sinking beneath the waves of poverty so that they’re “out of sight, out of mind” is a feasible solution for elected officials, then perhaps people who can display more reason and human compassion deserve a turn.