Payday Loans and Bankruptcy in Canada: No Clear Correlation 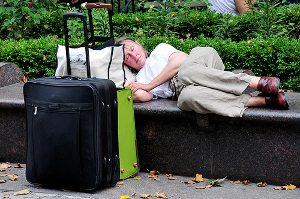 Payday loans have not put this woman on the street. This study indicates that there is in fact no clear correlation between using payday loans and facing financial calamity like bankruptcy. (Photo: flickr.com)

Human Ecology professors Ruth Berry and Karen Duncan of the University of Manitoba appear to have been ready to point the accusing finger at payday loans in Canada. Given supporting data, it appears they would have been happy to report that payday loans and bankruptcy were strongly connected in the Great White North. However, “The Importance of Payday Loans in Canadian Consumer Insolvency” does nothing of the sort because doing so would fly in the face of hard evidence. There is no clear correlation between bankruptcy and use of payday loans in Canada, according to the authors of this study. In fact, the overall financial well-being of payday loan customers appeared to be slightly more favorable than those surveyed who did not use payday loans.

In much the same way that payday lending has grown across the American landscape, payday lenders have stepped in to serve people of the inner cities who have been abandoned by the traditional banking industry – all because there wasn’t enough money to be had. And yet the same banks are the ones who charge payday loan companies with exploiting the public. While it is true that interest rates (when annualized as APR) for payday loans are higher than some traditional bank loans, the ease and convenience of payday loans tends to trump the offerings of banks and credit unions who demand higher customer qualifications and force consumers through a maze of paperwork. Credit-constrained consumers who lack liquid assets continue to find payday loans infinitely useful.

Berry and Duncan Want to Find the Payday Loan-Insolvency Connection

In their quest for this grail, the authors obtain data from “the main industry players in the payday loan field in Canada,” namely National Money Mart Company, RentCash and Cash Money. They also reference the Canadian Payday Loan Association, which is the national industry association that represents at least 40 payday loan companies (including those mentioned above), and the Financial Consumer Agency of Canada through analysis of related studies.

“Not much literature exists connecting the experience of payday loans with consumers filing for bankruptcy,” write the authors. Perhaps this is because there isn’t a real connection? One study they cite found that only one in 10 payday loan customers filed for bankruptcy following a payday loan. Other studies noted a similar percentage. Those respondents who were found to have multiple payday loans at the same time may have been more prone to bankruptcy, but this group was found to be a minority. Moderate usage – which represents the majority of payday loans – shows no clear correlation with bankruptcy filings. In fact, a study by Robert Mayer (“Payday Lending and Personal Bankruptcy,” 2004) showed that those who displayed such moderate use owed only 17 percent of net monthly income, which is hardly a bankruptcy-inducing situation.

More Findings that Break the Mold

Berry and Duncan analyzed data from a number of major Canadian cities. What they found tended to be consistent with what has been discussed thus far: that payday loans do not correlate directly to bankruptcy and that payday loan consumers tended to display greater financial well-being than those surveyed who had never used the short term loans. Here’s a sampling:

Vancouver: Bankruptcy households who used payday loans versus those who did not displayed a higher average income.

Installment Loans: Yet Another Path to Avoiding Bankruptcy

Berry and Duncan freely admit that “bankrupts with payday loans are more likely to be employed and have higher incomes and lower debt-to-income ratios than other bankrupts.” This brings them to their burning question: “Do payday loans contribute to bankruptcy?” Numerous studies paint very different pictures regarding the average amount for payday loans. Since more of them point to relatively small figures, it seems unlikely that such amounts would contribute heavily to bankruptcy. And since many lenders offer installment loans as an option in the event that a consumer is unable to pay their payday loan on the maturity date, there is a built-in path leading away from default and bankruptcy.

There’s an Indictment in Here Somewhere

Despite the fact that they found that payday loan customers tended to be more financially healthy than those respondents who never used the product, Berry and Duncan continue to operate from the position that payday loans are some evil product that should be avoided at all costs. Such is not the case, truly. They fulfill a need that traditional banking has largely ignored. Oh, but if only “mainstream lenders provided more accessible services, and educational institutions and non-profit or government agencies gave more objective information about payday lenders in public service advertisements, perhaps these borrowers might attempt to access other lending options,” write the authors. They follow that statement with the false claim that payday lenders do not make their interest rates known to consumers. In America, payday loan companies are required by the Truth in Lending Act to make this information readily available to consumers.

If there were only a database in place that could record payday loan usage, then perhaps there would be fewer abuses. That’s what the authors suggest in their 2007 study, and it has come to pass in numerous U.S. states. “A model that might be considered for regulating the number of payday loans held by one individual is the Drug Program Information Database (DPIN) which connects Manitoba Health and all pharmacies in Manitoba to a central database,” they write in reference to a 2006 Manitoba Centre for Health Policy study. “This prevents duplication and double-doctoring by providing the dispensing pharmacy with real time information to show the patient’s drug profile and allows the pharmacist to deny filling a prescription, which is the same or similar to another recently prescribed.” This is quite similar to what we see with payday loan databases. Such inventions do tend to lean toward the nanny state frame of mind, but many lawmakers have insisted upon pushing it through.

Correlation Does Not Imply Causation

And in this case, the authors can’t even draw a correlation between payday loans and bankruptcy filings in Canada. Certainly, those who have filed for bankruptcy would be burdened by any additional debt (including payday loans), but that implies no correlation (let alone causation). “It is not possible to determine whether the loan is hastening the insolvent’s decision to file for bankruptcy,” write Berry and Duncan. I’d go further than that, based upon their findings. I’ll say what they appear unwilling to admit: that payday loans help more than they hurt when used moderately (as most are). Bankruptcy is frequently the result of a complex mixture of financial and social issues. Payday loans are no scapegoat.