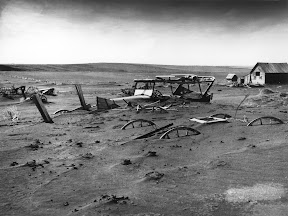 Payday lenders do not move into a poor area to turn it into a dust bowl. The truth about payday loan borrowers is actually surprising. Image from Wikimedia Commons.

The actual people that are payday loan borrowers are not who some claim them to be. Payday loan lenders are thought to target the most desperate and poor. Cash advance lenders are also said to concentrate in areas that are more densely populated by minorities. Like most stereotypes, the larger picture is actually a little more complex. Like most stereotypes, there isn’t a lot of truth in these views either.

The poorest of the poor cannot get a payday loan

The thing about the people who actually do borrow money from payday lenders, be it from a payday loan store or online payday loan lender, is that they are not the poorest and most desperate. First of all, one has to have a coming pay day to even be considered for a payday loan. One also has to have a checking account. Now, when it comes to banking, there are two designated people that don’t use a bank for every need. There are the “unbanked,” and the “under banked.” The FDIC and the Federal Reserve define the “under banked” as people who have a transaction account (e.g. checking or savings accounts) but still utilize alternative financial services (AFS) in order to obtain the products they need.

Proof of income is required

By definition, only the under banked can even get access to a payday advance. That means a person has to have a stable income. The unbanked, who are the poorest and most desperate, can’t get a payday loan if they tried. Furthermore, it is economics, not ethnicity, that determines where payday lenders locate. Studies have found that payday lending concentration correlated better to urban and rural areas where most of the population was younger than 40 and lived above the poverty level.

Stereotypes never live up to reality

The average payday loan borrower has a high school education or better, and makes between $25,000 and $50,000 per year. That is middle class, through and through. Considering how easily minimum payments and accumulating interest can trap a person for years, credit cards are far worse for that demographic. You can read more in the Payday Loan Facts and Statistics Report on Personal Money Store.