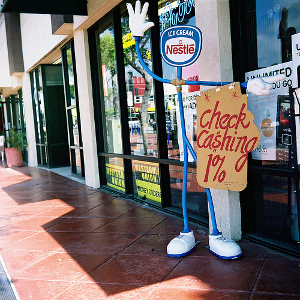 In what universe does a one percent check cashing fee exceed a $35 overdraft fee for overdrawing a checking account by $.01? (Photo: flickr.com)

In the 1960s and 1970s, many of America’s largest banks decided to go “where the money is” by pulling their branches out of the inner cities and focusing more on affluent areas. It may be sheer coincidence that infamous bank robber John Dillinger once gave that response to the question of why he robbed banks, but I’ll leave that for you to decide. Only in recent years has that trend begun to reverse.

What this exodus created was a growing population of “unbanked” individuals and families, people who depended upon everything from shoe boxes and coffee cans to store their money to check cashers for paycheck services and payday lenders for emergency cash. The traditional view society took of such people who depended upon check cashing and payday lending was that they were the “unsophisticated poor.” However, re-examination of this idea is advisable, as the truth may be that the unbanked are more knowledge about what the banking establishment is foisting upon consumers that we’re willing to admit.

Avoiding the World of High Fees

A recent New York Times article explores the phenomenon of why so many people are resorting to alternative measures rather than depending upon traditional checking accounts. While the journalist fails to produce any conclusive reasons, it doesn’t take much to read between the lines – the cracks in society’s pavement, if you will: overdraft fees of $35 per infraction for a checking account mistake are exorbitantly more expensive than a check casher’s fee of a few percentage points to cash a paycheck.

A 37-year-old native of the Dominican Republic, Abreau denies the bank representatives who come to his New York coffee shop to recruit him into the world of traditional banking. He doesn’t see the point, as what money he earns beyond his immediate needs is sent to his family back home. He does this in spite of the fact that banks are credit unions are within easy reach. However, so are check cashing businesses.

A recent Pew poll indicates that 86 percent of licensed check cashers in Manhattan are located closer than four blocks from a bank or credit union. People like Jose Abreau actually walk past the banks and credit unions to get to the check cashing businesses and payday loan stores. Perhaps this is because many immigrants come from countries where friends or relatives lost money due to bank collapses or corruption (where there was no FDIC to step in and insure the deposits), but in reality there are a wide variety of reasons. Language barriers can exist, but community outreach groups are available to assist. Financial education is available for those who may not understand how traditional banking works. However, the way many banks treat consumers stands at the top of the list as to why someone would not want to rely upon the banking monolith.

Not So Unsophisticated, Are They?

Millions of Americans live from paycheck to paycheck. That’s a fact that the current recession has made painfully clear. Yet this does not mean that these consumers who are just making it are unsophisticated. On the contrary, they’re educated enough to see that if a surprise expense or miscalculation dips their checking balance into the red, the resulting overdraft fees are unconscionable. Rather than having such an organization hold their money hostage, many people feel more comfortable with check cashing, where all the money they have is right there in their hands. Check cashing fees are much lower than any overdraft fee or minimum balance penalty.

Consider this. Many banks extend customers the “courtesy” to use ATM machines to withdraw more than they actually have in their accounts. This comes with a heavy – and damningly silent – penalty. We’re talking 200 percent on overdraft fees or more. How is this no legal fraud? How can this be advertised as a courtesy? Is it any wonder that check cashing customers don’t want anything to do with such institutional treachery? If banks would charge no overdraft fees and simply not allow purchases that would create overdraft to go through, they’d probably draw more of a customer base. But banks depend upon overdraft fees for much of their operating profit, so it’s clear that they have little incentive to stop.

Imagine this scenario if you don’t already understand just how disillusioned some are with banks. If a working poor family bounces a single check – let’s say it’s for a mere $3 – there’s an overdraft fee of $35 or more. That could be a weekend’s worth of food for hungry children, plus diapers and subway fare. If the family doesn’t keep their balance above a certain figure, they could be paying even more. Yes, if overdraft fee policies were different, I’d be telling a different tale. And some banks and credit unions do offer free checking. But not everyone meets the credit or documentation requirements, or their local bank many not offer the service. For the transportationally challenged, that means taking what’s closest to home.

What Carrot Could Banks Possibly Offer?

Banks are crying out for customers in this recession, aren’t they? What kinds of incentives could they offer to make people want to use their services? Aside from being able to receive direct deposit or develop a credit history, it seems that people would like to earn a decent amount on their money. But savings accounts that offer .0125 percent interest don’t cut the mustard, let alone the artificial buttery spread. It’s better than nothing, but not by much. Factor in the fees and penalties and traditional banking can feel as good as a sock in the eye.

Hiding from “The Man”

Those who avoid traditional bank accounts for the services of check cashers may be hiding, too. I mention this not to justify the practice, but it’s something of which we should be aware. Without a checking account, bill collections and courts have one less option for skimming cash in the event that the consumer owes money. Of course wage garnishment is still a possibility. And what about those people who avoid traditional banking because their income is under the table? Being able to cash in on certain welfare benefits is a powerful lure, which could explain why some consumers don’t feel the compulsion to put their money in the bank where it can be detected so easily.

Not Such a Rosy Picture for Most

One reader commented on the New York Times article in a manner both poetic and bitingly real:

O, these great unwashed masses, unwilling to strap themselves to our glorious consumer banking system where they can know the joys of ATM fees, NSF fees, account maintenance fees, account research fees, etc. , all while enriching themselves on the 1.8 percent interest rate! What is wrong with these people? Don’t they want to be part of the American Dream?

Avoiding traditional banking is second nature for many, but steering clear of it entirely can have its disadvantages. Check cashing is an attractive option for those who can ill-afford the predatory practice of overdraft fees. Unfortunately, that would include most people. Many who have money do not understand just how much the deck is stacked against those with so little. Bank presidents think in terms of profits; bank customers hope not to run afoul of bank policy, as they have become increasingly unprofitable for consumers with each passing year.