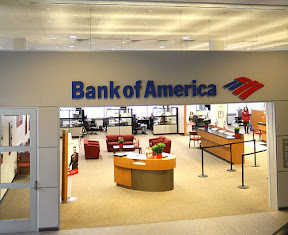 Credit card issuers, such as Bank of America, have been affected by new laws regarding credit cards. Image: MoneyBlogNewz/Flickr.com/CC-BY

New regulations for credit cards on how interest rates and fees can be assessed are working. However, some loan lenders are lamenting the new rules that require greater disclosure when changing terms with customers. Outlawing guerrilla-style fee and interest raises has led Bank of America and other companies to lose value from credit card units.

The largest loan lender in the nation, Bank of America, recently announced that it would be adjusting previously filed financial statements regarding the banks’ credit card unit, according to Bloomberg. B of A announced that it was adjusting a write down of FIA Card services, its credit card unit, for late 2009 from $10.4 billion to $20.3 billion, meaning the credit card unit is worth $20.3 billion less thank it was in 2008. In other words, the company adjusted previous filings to reflect a greater loss of value than previously thought. The write down is not a true cash loss, but an adjustment of the “goodwill” value, or the value of an asset above market value, due to the prestige of the holder of the asset. The bank cited regulatory conditions and “deteriorating credit quality” for FIA Card Services being worth $10 billion less than estimated in 2009.

Some credit card loan lenders, such as Bank of America, are claiming that they are being hampered by new regulations, specifically the CARD Act, or Credit Card Accountability Responsibility and Disclosure Act. It is posited that the act means less access to advance cash for further lending, though this means that the law is working. Since the CARD Act was enacted, fewer people have been hit with late fees and stung with sudden interest rate raises, according to CNN.

The CARD Act has yielded some great results. Since the law was passed, studies show that about 2 percent of card holders had interest rates raised, compared to 15 percent before the CARD Act was passed. Late fees, which accounted for $901 million in fast cash for card issuers in January 2010 — before the Act took effect in February 2010 — had dropped to $427 million by November 2010. That means companies from Scottsdale to Birmingham and all over the U.S. that look to seemingly surreptitious practices for revenue are having a harder time, which is what the CARD Act is supposed to do.