Home > Advice > Networking Advice for Money Now and Success in Anything

Networking Advice for Money Now and Success in Anything 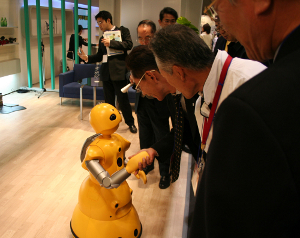 Networking is an essential part of being human. You never know who you might meet – or who might need personal loans for new transistors! (Photo: Wikipedia.org)

In most any business, networking usually helps secure money now. Think of it as a personal loan. Be a friend to others and they’ll be a friend to you. The music industry thrives on the connections made between old colleagues, business associates and bosses. The sports, publishing, science, movie and fashion industries all require networking for everything to run as smoothly as possible to create entertainment for you, and in other cases, legal solutions you wish to solve.

You want to try and always make friends with people who are around you. If there is someone who is sitting next to you or standing at the bar beside you, spark up conversation and chat with them. If you happen to know the person who you are around, solidify the relationship that you have and keep your energy bubbling. Of course, you don’t want to come across as too excited, but be willing to talk with people, because that’s how networking and developing contacts begins. If you aren’t sitting next to someone at any given event or during a monthly visit to pay a bill, get next to someone who you would like to meet.

Arriving early gives you the opportunity to greet people and develop closer relationships. Besides, who feels liked when they rush into a meeting seconds before it begins? Get yourself a cup of coffee or bottle of water, relax and temporarily turn your job title into that of a host. Also, staying later is much tougher for people, since they usually have to run out immediately after the meeting, so get in good by getting in early.

If it isn’t much trouble, ask one of the people you know to introduce you to new people they are currently speaking with. The more people you know, the more chances you have at any possible thing in the world. When people remember you, they tend to provide you with opportunities that they come across. “I thought of you when I saw…” How many times have we heard that expression from friends and associates? If you are someone who doesn’t like to meet new people, you will risk losing out on experiencing different places, ideas and people.

Use Down Time Effectively

Some people might say, “You can’t get money now by sitting down.” However, for networking purposes, down time can be used effectively. While going to the bathroom, many of my friends – some of whom are top networking businesspeople – have scored new clients via phone. Another one of my friends landed a high five-figure deal while on break at a coffee shop. Every possible moment can be used to network and connect to new people who can provide new business.

You Must Give in Order to Get

You have to give people a reason, other than your own passion for your business, to contact you. Just handing someone a business card isn’t enough, especially in a day and age when people can obtain mostly anything that they want quickly. Sadly, it takes more effort to get someone’s attention. A smile and dazzling personality are great icebreakers, but they alone can’t do the job, unless you use those “gifts” well.

Networking doesn’t have to become a nine-to-five job for you. You can network while walking your dog, or while mailing envelops at your local post office. Just keep in mind, like personal loans, networking can get you money now!