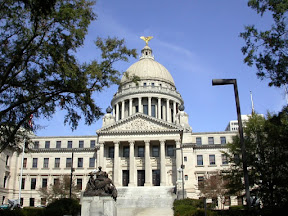 Legislators at the Mississippi state capitol have stalled passage of a new payday loan regulation. Image from Wikimedia Commons.

The Mississippi state legislature has stalled a bill that would further regulate payday loan lending in the state. States have increasingly passed legislation regarding payday lenders, usually to reduce interest rates. The new regulatory bill is stalling as legislators cannot agree on terms.

Other states are going through similar processes. It will be interesting to see how this plays out in Mississippi and with payday loans in PA.

It has been anticipated for some time that the Consumer Financial Protection Bureau may end up going after payday lenders, but that may not be the case. The Bureau was created as part of the Dodd-Frank Act and is headed by Elizabeth Warren, who was appointed to the post by President Obama. The agency has yet to do anything, as it isn’t an active agency yet, but it may not do much with the payday industry, according to the Motley Fool. The CFPB can’t cap interest rates, but it can call for greater disclosure from lenders.

Greater amounts of disclosure would likely act more in the interest of payday loan and cash advance firms than banks. Given the number of fees that credit card and other accounts have tied to them, and the scant fees assessed by payday lenders, more people may end up taking out a payday loan. Most payday loan lenders already disclose all fees upfront due to the Truth in Lending Act.