A rare case of catching the bad guy 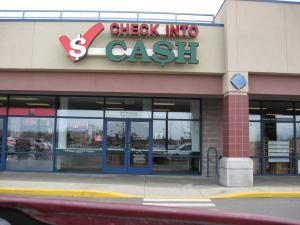 Very rarely do I read about a payday loan store robbery in which someone actually gets arrested. In fact, of the 20 or so robberies I’ve reported on this year, there have been four arrests, if I am remembering correctly.

So I was surprised today to read this report by Meghann Cunniff in a Spokane, Wash., newspaper.

Two men have been arrested in connection with a robbery at a payday loan store in north Spokane.

The men, who have not been identified, were found after Spokane police and Spokane County sheriff’s deputies responded to Check Into Cash at 555 E. Francis Ave. about 4:15 p.m. on a report of an armed man robbing the store.

They found a suspect a few blocks away near East Lyons Avenue and North Standard Street, said Officer Tim Moses, but the man ran away.

Police set up a perimeter and called in a K9 unit, leading to the men’s arrests.

The stolen cash was recovered, along with the gun used in the robbery, police said.

Police believe the two are responsible for two robberies at the same pharmacy Jan. 8 and Jan. 11. The two are also accused in several payday loan store robberies in Spokane. The most recent robbery was another pharmacy that was hit Feb. 5.

The first Spokane payday loan store robbery took place Jan. 14, when the robber held up a Check and Go store. Jan. 20 a Check Into Cash location was robbed. The same Check into Cash location was robbed yet again Jan. 29 within hours of another robbery at another Check into Cash store. After the Check Into Cash stores beefed up security, employees and police believe the same man attempted another robbery at the same store he had already robbed twice.

The Check into Cash location in Spokane was able to thwart an attempted robbery by increasing security measures. The stores began keeping their doors locked and requiring customers to show ID before entering the store. One night a man wearing a black ski mask attempted to enter the building, but he ran away after he realized the building was locked.

Other payday loan store should consider this policy before it’s too late and they get robbed, too. Another important security measure is video surveillance cameras. Video surveillance is often very helpful in identifying suspects. Also, posted signs informing people that there are cameras on the premises can deter criminals, as can the appearance of the cameras themselves.

Be on the lookout