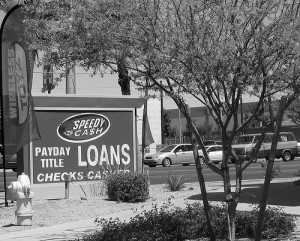 WICHITA — Two men attempted to rob a payday loan business Monday, but were foiled when an employee was able to lock the doors and call the police.

The two men approached the Ace Cash Express at 801 S. Woodlawn around 8:40 a.m. and attempted to force an employee into the building, police said.

One of the men was armed, but the woman was able to lock the men out and call police.

The suspects then fled. There were no injuries or losses reported.

In this case, a simple door lock and a willful employee were all it took to stop the robbers and protect the cash, not to mention the store employees. However, in most cases technology of a bit higher caliber helps out a lot.

Banks are well-know for having top-of-the line security systems. Banks have huge amounts of cash on hand, and thus they expect to get robbed. So they’ve done everything they can to protect their assets and workers.

Though payday loan stores don’t have nearly as much cash as banks, they are often targeted for the same reason as banks. Any business that deals in handing out cash till payday has to have  a lot of it lying around. Payday loan stores get target because of their cash, but many don’t protect their cash very well. Criminals often get away with the money and are never found.

Perhaps payday loan store should start to think like banks, realizing that they could, and probably will be robbed. Perhaps that will help payday loan store owners develop better strategies for protecting their employees, business and cash.