Use of open credit loans declines with credit card delinquencies 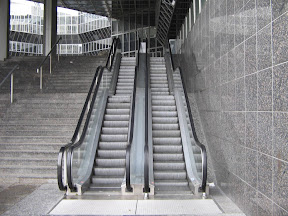 Dealing with credit cards and other debt can be like running up a down escalator, and more people are paying them off than ever. Image from Wikimedia Commons.

Americans are paying off debt in greater frequency, as the popularity of open-ended credit loans is declining. The near collapse of the credit market has led to more people questioning the value of debt. More people want their payday cash going to their own pockets, not to banks and loan lenders.

For the past year or so, more people have been paying down their debt on credit cards and open-end credit loans, as fewer people feel comfortable saddled with large debts. Bank of America, the largest consumer bank in the U.S., has reported that charge-offs from credit card delinquencies has dropped from 13 percent to just under 10 percent since the beginning of the year, according to ABC. JP Morgan Chase had charge-offs drop from 7.78 percent to 7 percent between September and October alone. Charge-offs for Discover dropped to 6.83 percent from 7.15 percent in the same time period. More people are paying off debts, as having to keep making installment loan payments is never pleasant, and more people would prefer to keep their payday cash for themselves.

Open end credit can be the most harmful

Credit and finance loans extended by more traditional or mainstream loan lenders can actually be the most harmful. Though interest rates may seem lower than on a cash advance or a payday loan, making minimum payments for years can, in fact, be worse than the fee on an occasional payday advance. Also, since the typical payday loan is only for a few hundred, rather than than a few thousand dollars, the risk of ruin and bankruptcy is less. Interestingly enough, annual interest rates on loans that mature in two weeks are hundreds of percentage points lower than overdraft fees.

No one likes debt

More people are realizing the nightmare that debt is, and many Americans are taking steps to get out of it. Debt was something most people used to avoid, and there is a good reason for it. You can read more in the Payday Loan Facts and Statistics Report on Personal Money Store.