Convenience – But At What Cost? 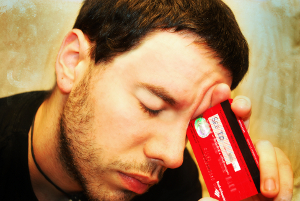 Using credit cards can be a pleasure and a pain. Will anonymous credit cards make security one less thing to worry about? (Photo: flickr.com)

Credit cards are both a blessing and a curse for millions of people worldwide. Managed use of this form of consumer credit can help build one’s credit score and provide a convenient means through which to transact with merchants who require a credit card in order for a consumer to secure services (automobile rentals, hotel rooms, etc). The key to managing one’s credit card usage, however, is a something that many consumers do not practice: paying off the balance each month. By making only the minimum payment, credit card debt grows significantly as interest is compounded. Revolving lines of credit like credit cards can saddle a consumer with a lifetime of debt.

Use of credit cards can expose consumers to the nightmare of identity theft. Whenever you pay a restaurant bill with your card, you’re exposing yourself to risk if the server is less than honest with your sensitive information. If you’re shopping online at a site with less than industrial-strength security, great potential for an information leak is there. Giving your credit number over any form of telephone connection is highly problematic as well.

Such scenarios of financial pain and horror might cause you to wonder how you can keep yourself from becoming a victim. One answer is to use payday loans rather than credit cards in emergency situations where you need quick cash, as the process does not generally expose you to potential identity theft. However, having a small number of credit cards can be beneficial to your FICO score (indicating diversity in your credit portfolio, which creditors like to see), so perhaps a better long-term answer would be how to make credit card usage less dangerous.

Elli Androulaki and Steven Bellovin of Columbia University recently published a study entitled “An Anonymous Credit Card System” which proposes a system that could serve as a solution to this problem with credit cards. Consumers would be able to kept close track of their credit card usage while banks would be able to justify the payments it makes to merchants through an anonymous E-cash system.

One of the benefits consumers enjoy when using credit cards is that logs of transactions are readily accessible. In addition to convenience, this provides a level of security in that consumers can challenge erroneous charges. However, such logs can be a double-edged sword in that banks can (and often do) sell that consumer profile information to third parties. What the study authors propose is a system that maintains the benefits while at the same time protecting consumer and bank privacy through a barrier of anonymity. For consumers, however, the anonymity system express is conditional in that the consumer must make honest attempts to keep up with payments. If an overspending transaction occurs, the consumer is blacklisted from the anonymous service.

For online retail, truly anonymous credit cards would prevent any unauthorized outsider from acquiring information about a transaction or those involved in the transaction. Androulaki and Bellovin stress that banks would not be able to create profiles that they sell without the cardholder’s permission. In order to achieve this level of privacy and security, the authors have created a theoretical system whose high points will be discussed here.

The Dawn of Credit Card Security

According to previous studies of credit cards and state-of-the-art security methods, measures have existed since at least 1994, but such schemes have involved extraneous trusted parties to maintain security. Furthermore, previous credit card protection schemes offered no expense reports or means of error correction for consumers. Using E-cash as a money substitute that cannot be copied or spent more than one time has furthered security schemes, but it requires prepayment to function and works only for online transactions. It also provides no avenue for error correction or clear listing of transactions. Prepaid debit cards are limited in their security application for similar reasons.

What the authors propose is a system that combines an E-cash system for making payments and a combination of “blind and plain digital signatures” for other operations. Consumers, merchants, card-issuing banks, acquiring banks (institutions merchants are authorized to receive payments through) and credit card associations (Visa, MasterCard and others who set transaction rules between the different bank types named here) would all be served by this system. Credit cards under the new system, write the authors, “should not be forgeable or usable by any third party. It should be possible for cardholders to track their transactions (Expense Report Service) and provide an undeniable proof of any mischarge (Error Correction Service) without endangering their privacy.”

There are two types of E-cash used in this system, drawn from “wallets.” One is accessed by the consumer while the other is where merchants deposit E-cash received from the consumer. Blind signature schemes are used to ensure that merchants get paid and consumer identities are protected from third parties. If set limits are exceeded, conditional anonymity of the consumer is revoked – an added incentive to make payments, which appeases the banking establishment. For the most part, merchants and consumers are identified only by signature keys when they open their E-cash accounts with their banks. In order for consumers to access their E-cash credit cards, they create an anonymous pass code. Backups, multiple layers of encryption and loss recovery systems are present here, as are timestamps for online transactions; consult the study for a more detailed account. It is interesting to note that encryption is performed by the consumer during the anonymous credit card origination process, via secure home software. Thus, a home computer would be required.

How are Anonymous Credit Cards Paid?

Obviously a consumer honor system would be inappropriate, so the consumer is required to report the amount of money spend each month to the card-issuing bank. Regular backups and reporting are required to protect both banks and consumers. Spending is proven through receipts. The card-issuing bank then computes the consumer’s monthly payment through the same formula used today for standard credit cards.

How Does Error Correction Work?

The consumer has the right to contact their credit card association in the event of an error or fraudulent use. In the event of a error, a receipt is required in order for a correction to be made. When the merchant makes the correction and gives back funds via E-cash, the currency passes the refund to the credit card association, who in turn moves it to the merchant’s acquiring bank. It is the acquiring bank who finally moves the funds back to the consumer’s card-issuing bank. If fraudulent charges require purchase cancellation, the exchange is handled in a similar fashion.

Breaching the Veil of Anonymity

As mentioned previously, consumer anonymity is dropped if credit cards are charged over their limit. In that instance, all E-coins withdrawn by the consumer are traced. The authors mark this as necessary for loss recovery. But seeing as how a cardholder may open as many anonymous accounts as desired, being able to achieve transaction linkage is possible.

Buying into the Checks and Balances

The anonymous credit card system proposed by the study authors could eliminate identity theft altogether (until someone figures out how to introduce decryption technologies in the middle of the process). That could occur, but the system proposed could be the best current option for safe credit card use.

I find it interesting that the proposed system would require consumers to hang on to their receipts. It’s something consumer groups and banks (not to mention mom and dad) always advise us to do, but how often do we practice what they preach? If you’re a conscientious consumer who already keeps track of such things, your adjustment to such an anonymous credit card system would likely be painless. For those of us who are forced to become more accountable, the transition would be more difficult. However, it is a much safer financial road to travel. It is also a responsible road. Sure, payday loans are still be more desirable in situations where carrying a balance over from month to month becomes too expensive, but credit cards will still have their place. The layers of checks and balances that preserve security may sound inefficient to some, but remember that the financial world rarely gives us something for nothing. This isn’t trading freedom for protection, in my opinion.