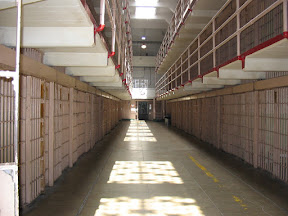 More people are freeing themselves from the prison that credit card debt can become. Image from Wikimedia Commons.

Some of the good news about the recession is that many Americans are wanting to tighten their belts and get rid of debt. Many are adjusting their budgets so that a little fast cash can get applied toward debt, especially toward one of the most common and expensive sources of debt. Fewer people are using credit cards these days, and smaller balances are being carried. Not only that, but there are also fewer delinquencies. It seems that people are able to get debt relief by their own bootstraps.

For the fifth financial quarter in a row, the average balance carried on credit cards has fallen. The level of outstanding credit card debt has not only continually fallen, it has fallen to a new eight-year low, according to CNN. That’s a low point in the economy that you want to have. Not having a credit card bill every month that can send you running for a payday loan is something that a lot of people are aspiring to, and it seems that the American people are doing something about it. Not only do your bills decrease, your credit score starts to increase. It’s like giving a cash advance to yourself.

On top of that, there are fewer credit card delinquencies.  Defaults on credit cards, or 90 days past due payments, have plummeted to just 0.92 percent nationwide. That is a decrease of 17.1 percent from the previous quarter and a 21.3 percent decrease from last year. That means that a lot of people invested their tax return money wisely. Instead of buying a new flat screen or cellular phone, their returns went toward paying down debt. This is great for consumers, and credit card companies have to be somewhat happy about some more instant money coming in.

Something that has been made clear during the recession, it is that too much consumer debt is bad for you. It makes a person very vulnerable in case anything goes wrong, which is why it’s a great thing to see people tightening up on their borrowing.