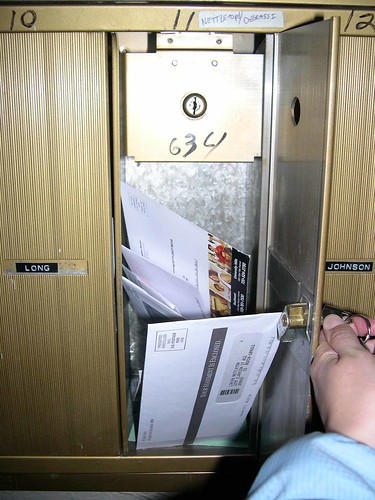 Consumers are paying down their credit card debt and avoiding new charges, so always open your mail and read the fine print from credit card companies busy creating new ways to gouge their customers. Flickr photo.

Consumer credit dropped in May much further than was forecast, with the decline led by significant drop in credit card debt. Credit card delinquencies fell to their market rate since 2002. As Americans save more and borrow less, desperate credit card companies are coming up with new ways to gouge customers. New credit card rules aimed at curbing the usurious behavior of credit card companies may be giving consumers a false sense of security.

A Federal Reserve report released Thursday showed that consumer credit dropped at an adjusted annual rate of 4.5 percent in May–the fourth consecutive month of declining credit.  Revolving debt, which includes most credit card debt, dropped by 10.5 percent ($7.3 billion) in May, according to the Fed’s report. Non-revolving debt, including car loans, fell by $1.8 billion in May. Business Week reports that economists’ projections in a Bloomberg survey ranged from a decrease of $5.2 billion to an increase of $2 billion in May. Consumer credit has increased only twice since the end of 2008. Consumer spending, which accounts for about 70 percent of the economy and is what America is counting on to revive the economy, will be weak as Americans pay down their debt.

New credit card rules are to be broken

Other credit card companies have recently hiked balance transfer fees, cash advance fees and foreign transaction fees. Gerri Detweiler, personal finance advisor at Credit.com, told CNN that read the mail you get from your credit card company is more important now than ever. Don’t automatically assume its junk mail, because you’re only going to have the 45 days to opt out if you actually read the fine print. And as credit card companies become more desperate, they will not only raise existing fees but create all kinds of new fees.