Home > Articles > Do We Need a Cash Advance or More Small Businesses?

Do We Need a Cash Advance or More Small Businesses?

America Could Use a Bit of Each 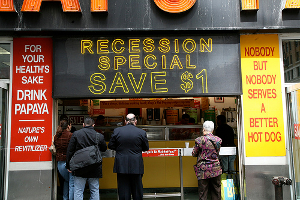 The way things are going, small businesses are going to need more than that. What about a cash advance for all? (Photo: flickr.com)

The U.S. has finally traveled out of the dark ages of recession, or so it seems, because a few people I know have had to utilize cash advance loans to keep their businesses afloat. Many of financial hardships that people are facing aren’t spewing forth from a lack of effort. Typically, recoveries from recession in the United States are lead by small businesses. It’s during this time that small businesses should be springing forth, and advancing the growth of the current economic state.

Positives of This Recession Break

The positive side of a “recession breather” is that small businesses can lease or buy fairly cheap commercial property while they prepare for financial growth and industry expansion. My friend and newbie online business owner Carl R. said, “I believe that in up to six months from now, the unemployment rate should scale back down to the eight percent, or maybe even five percent mark.” At that point, we should be celebrating and enjoying life, because small businesses would provide four out of five new jobs for Americans.

Is There a Dark Side to This?

Unfortunately, if we do happen to regress into another dreaded recession, falling from the “recession breather” we’re currently in, it could go down this way: unemployment could crawl “way above” 10 percent. That would definitely put us into another funk. Commercial Real Estate values would sink more than they expand, due to a lack of small business expansion. When small businesses refuse to expand, they react by rebuffing the notion of hiring, because of the possible lack of expansion. The concept is similar to a revolving wheel. Small businesses are the rise and fall of our country’s financial destiny. Small businesses fear the thought of consistently changing company policies and creating rigid changes in energy, union membership and health care matters. In this case, unfortunately, a cash advance loan wouldn’t help my friend Carl.

There are wonderful possibilities as to how small business power could signal an economic charge against financial woes and provide recession remission. However, the reality is that small businesses still aren’t hiring, and most are aware of the facts presented here.

Some Businesses are Doing Better than Others

Some of the conglomerates like McDonald’s, Green Mountain Coffee and Panera Bread have weathered the current recession, either by keeping profits at a set high or improving their sales figures. However, not all restaurants are operated and provide as much convenience as fast-food chains Most use and need credit lines to run their businesses.

Will President Obama Save Small Business?

There are numerous issues involved in the recovery of small business. Energy and union labor are two big issues worrying small business owners. President Obama’s plans for health care are a current worry as well. Inflation and commodity prices that determine the costs of food production and delivery all play a key factor in the anxiousness small business owners are feeling about what’s ahead in the upcoming months.

Michael Lind had some things to say on Salon.com about the ideas and future plans for Obamacare, in that it practically places small businesses on a financial “sacrificial altar.” I won’t delve into the intricacies of his statements, but if Mr. Lind’s words represent the thoughts of President Obama, and congressional Democrats (who poor and middle class people have been hoping would rescue our country from its existing financial position), small businesses will only be able to dream of expansion.

Not a Storybook Ending

The sad truth is that locked down small businesses won’t start hiring, and the result will be that the current commercial property bomb might not be defused in time. And I’m sure that no one wants to see America fall prey to the explosion of a second recession. Thankfully, a cash advance loan is there if – or when – you need one.