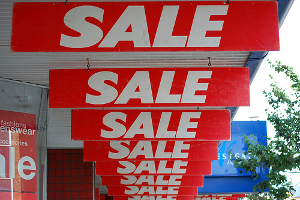 This holiday season, the retail giants are battling for your business. Need a cash advance to keep up? (Photo: flickr.com)

Psst! Hey you, cash advance reader! Want a great holiday deal on a flat screen television? Visit Amazon.com where it’s on sale. Hold on a moment. Look at Walmart.com, where they just dropped the price. No, wait! Amazon actually has the better price.

Prices have fallen faster than J.Lo at the American Music Awards as these two retail behemoths go toe to toe. It seems the battle began over who could sell a fistful of best-selling book titles for less, and has now proliferated to a wider array of items—DVDs, furniture, clothes and yes, flat screen TVs. Wal-Mart and Amazon are also currently allowing third parties to sell on their Web sites, and are now also offering beauty and health products via the Web.

After hearing that GSI Commerce Executive Vice President said, “It’s not about prices of books and movies anymore. There is a bigger battle being fought,” you might conjure up a David vs. Goliath type of scenario. “The price-sniping by Wal-Mar is part of a greater strategic plan. They are not just going to cede their business to Amazon.”

Online Shopping is Making SOMEONE Richer

Believe it or not, Amazon made $20 billion in sales last year, compared with $405 billion for the nation’s largest private employer, Wal-Mart. Though online sales amount to just four percent of the nation’s retail business, Web-based sales are steadily rising.

Online shopping has gained popularity at a fast pace, kind of like cash advance loans during the recession. Have you heard the one how popular it is to get a cash advance San Marcos TX? It’s like sitting at the cool table in the cafeteria…at a mental hospital. Just kidding.

The blog “Seeking Alpha” says, “Twenty-one percent growth has been seen in the last year. Amazon’s sales were up 24 percent in the 3rd quarter of 2009.” Also, 44 percent for general merchandise and electronics, reports the Times. What’s amazing is these numbers were gathered while retail was flat overall and the recession was just dying down.

Yet CNBC says that Wal-Mart is receiving only half as many unique visitors to its Web site each month.

Look at them Go, Toe to Toe!

CEO of Walmart.com, Raul Vazquez, told The Wall Street Journal, “Our goal is to be the biggest and most visited retail Web site. Walmart.com is going to be the ‘Wal-Mart of the Web.'”

“The price of Amazon Prime is too much. It’s only a matter of time before Wal-Mart becomes the king of online shopping,” Vazquez is reported saying to the Times.

How are consumers benefiting so far? Take a look:

Target (a Minneapolis-based company that isn’t owned by the French, dear reader), Amazon and Wal-Mart reduced the online price of 10 brand new releases to less than $9. Since then, prices have gone up, but they are equally as inviting to holiday shoppers. At Amazon and at Walmart.com, the price of Sarah Palin’s “Going Rogue” is a sale $14.50, while Barnes & Noble sells it online for $17.30.

Target, Amazon and Wal-Mart have lowered the pre-ordered online price for hit movies like “Star Trek” and “Harry Potter and the Half Blood Prince,” which are sold at Amazon for only $9.99 and a penny less at Walmart.com.
UPDATE: Target is “Out of Stock” presently

According to the Times, “Call of Duty: Modern Warfare 2,” is priced to move. Wal-Mart offers a $15 gift card with purchase, and Amazon has quickly followed Wal-Mart’s lead.

What’s next in the future of these retail giants? It’s too hard to tell right now. They won’t need a cash advance loan any time soon. However, what we can expect is that Wal-Mart will be über aggressive in risking a bigger claim on online retail.