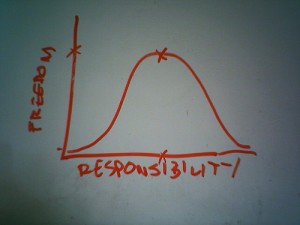 Yep, it’s worked that way for me, too. (Photo: flickr.com)

You’ve seen the disclaimer before about using emergency money loans responsibly. But what does that really mean? Sure, you’d be foolish to plan a trip to Las Vegas and go to the tables strictly with cash advance money. There is no rate of return and the house always comes out ahead in the end. It would also not be advisable to use a cash advance to help train yourself for an ice cream-eating contest. Your waistline will already be paying for that little escapade with interest, so why would you want to also pay interest on the money used to purchase your ice cream and ice cream paraphernalia?

In general terms: a cash advance is there to help you during a small-scale financial emergency. It’s easy to sit back and want something, and it’s also easy to request a cash advance to scratch that itch. However, that doesn’t mean you should do it. A cash advance is a responsible way to deal with a difficult situation when your options are limited.

It all sounds well and good, doesn’t it? You know as well as I do that temptation can strike at any time. Splurging once in a while is fine, but actually using short-term loan products like a cash advance to artificially inflate your budget is asking for trouble. I haven’t been in that exact situation, but I do remember a couple of instances where the strong impulse to buy overrode higher brain function.

Let’s go back to when I was a child. My father owned a trucking company, and as a result of that he was not around as much as I would have liked him to be. He knew this, and he felt guilty about it. He attempted to compensate by buying me things, particularly comic books. However one day I was out with my dad on the weekend running errands and we stopped at the local gas station convenience store. It had been a long day and we were both tired. My father and I went into the store so that we could buy drinks. I was hoping for my favorite slushy, cola flavored. Little did I know that that little convenience store would become one of the battlegrounds of my childhood. Next to register was a rack filled with cheap toys, the kind you find in convenience stores, grocery store toy aisles and in the back of drugstores. I spied a small puppet — it was a Raggedy Ann puppet as I recall — with no moving parts and a very cheap presentation this way of the dingiest Taiwanese toy factory/sweatshop. I had heard mom say that we needed to save money, but I would have none of that. I didn’t have a toy on hand to amuse myself for the rest of the car ride, so I insisted that daddy buy me the piece of junk puppet.

The line was drawn, and I wouldn’t give an inch

It was on this occasion that my father decided he would play at taking a stand. He would attempt to teach me a lesson about money by using all of the reasonable arguments, such as that the puppet was very cheap, it would break easily and I didn’t have to have a new toy every time I went outside. I wasn’t a baby when this happened, so logically I could understand all of the things he was saying. I wasn’t unintelligent, but the infantile mind I had when it came to valuing money took hold. I began to whine and drone on in my usual way about how I really wanted it, and I think I embarrassed my father in front of one of his friends, the shop owner. Rather than get angry, however, my dad caved like he usually did. By the time we got home that evening, my funny little puppet was already broken and forgotten. I could scream for money, but I didn’t appreciate it once I got it. I wanted a cash advance, but I had no true inkling of what it took to provide that money. I still feel guilt over what I put my parents through to this day, and I’m a grown man now. Cash advance for counseling… now that’s a more responsible way to use a short-term loan.

Skip ahead 12 years. I’m a young man on a family outing to the zoo. We had a great time calling to the hyenas, watching the alligators consume their daily meal and ducking as the gorillas flung their fecal matter across the enclosure. It was our family tradition that at the end of the visit, we would stop in the gift shop near the exit to the park. I am sure this tradition probably began with me wanting a toy, but I was no longer a little boy. Today, the little boy was my cousin Ryan. He was (and still is) a sweet kid with a very intuitive sense of how others are feeling, but on this day he was somewhat less than sweet. As he paced furiously up and down the aisles of the zoo gift shop, Ryan’s expression grew increasingly upset. He had his little coin purse in hand, and he was looking for a souvenir that he could afford. As it stood, all that was within his limited budget were some rather cheap toys (more plastic bits of stuff from Taiwan) that he didn’t even seem to be very excited about.

Yet some kind of compulsion was at work here. Ryan had to buy something, and the fact that there wasn’t anything that he truly wanted was unimportant. I recognized what was going on because I’d been there myself when I was a child masquerading as a consumer gremlin. Buying simply for the sake of buying was ultimately not fulfilling, and I wanted to teach Ryan some of that lesson. I wanted him to understand that it was okay to save his money for something he really wanted; spending for the sake of spending would put him in a position where he’d have junk instead of something he really wanted, like a new skateboard. A cash advance for the purpose of slating greed was no reason for him to break his bank.

I wasn’t able to convince Ryan to save his money, which I suppose is not surprising. Those kinds of lessons have to come at an early age, ideally from one’s parents. My parents didn’t do that for me. They were good parents on other fronts, but when it came to money, they weren’t much help. Ryan’s upbringing was probably similar.

So when you think about whether or not to take out a cash advance for your short-term financial issue, consider whether you are merely responding to a gut level decree, or whether you’re facing a problem that needs closure. Taking out a cash advance to solve a real problem is the more responsible way to go. Click the button above to get started here. I just hope you’ll use it responsibly.