Urban blight and cash advance loans have nothing in common 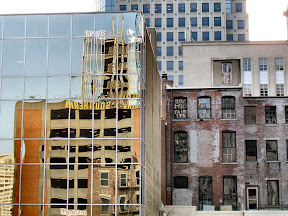 Urban blight and cash advance loans have as much to do with each other as chocolate and the fall of the Roman Empire. Image from wikimedia commons.

The universe operates on a system of cause and effect, which contradicts one of the claims some make about cash advance loans. For instance, there are people who blame a phenomenon called “urban blight” on cash advance loan lenders. The phenomenon of urban blight, or urban decay, began far before the cash advance industry even existed. That claim uses what is called a logical fallacy.

Numerous people have pointed to the cash advance loans industry as a culprit of urban blight. In fact, some cities have run cash advance and payday loan stores out of town because they believe that idea. Urban blight or urban decay is a phenomenon that has usually been associated more with a weakened economy, rather than the emergence of a single factor such as payday lending. It often goes without saying that this kind of decay really began decades before payday loans, as a product, even existed. It isn’t known where the first actual payday loan store was opened, but it is believed that among the first was Q.C. Holdings in 1988.

The idea that payday loan lenders cause urban decay is a logical fallacy called “cum hoc ergo propter hoc.” Literally it means “with this, therefore because of this.” Basically, it means that because two things coincide, there must be a cause and effect relationship. If that were true, then a Pepsi commercial could cause a football team to lose the Super Bowl. There’s no evidence that payday lending is a cause of poverty, proximate or otherwise. One has to bear in mind that there was abysmal, wretched poverty in the world, including the United States, long before payday lenders arrived and even before the modern financial system did.

Poverty has a multitude of causes. Given that many negative economic conditions have nothing to do with short term consumer lending, crediting payday loans with urban blight it is a dubious attrition. You can read more in the Payday Loan Facts and Statistics report on Personal Money Store.